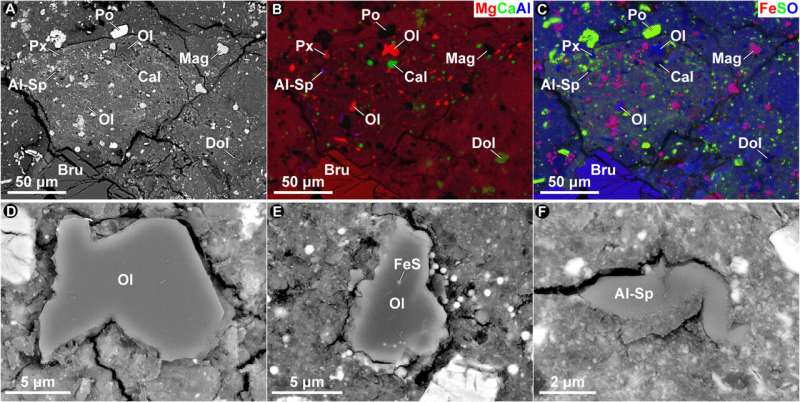 An international team of researchers studying material from the asteroid Ryugu returned to Earth by Japan’s Hayabusa-2 space probe has found evidence that the asteroid formed in an outer part of the solar system, near where comets tend to form.

In their article published in the journal Scientists progressthey also note that some of the materials found at Ryugu seem to come from material mined from the inner parts of the solar system to the outer parts.

Two years ago, dust samples taken from the asteroid Ryugu were brought back to Earth by the Japanese spacecraft Hayabusa2. Since then, various research groups have studied the samples to learn more about asteroids and the formation of planetary bodies in the solar system.

In this new effort, the researchers focused their attention on the minerals found in the dust samples. They found evidence of amino acids as well as carbonate minerals, materials that tend to form in low temperature aqueous environments. Such evidence strongly suggests that the asteroid formed in an outer part of the solar system.

The researchers also found many similarities between Ryugu and Ivuna – a carbonaceous chondrite meteor found many years ago in Tanzania – copper and zinc isotopes looked very similar.

Some materials in the Ryugu dust could not have formed in the outer solar system – minerals such as spinel, olivine and perovskite, all of which form at high temperatures. The researchers found that the ratios of oxygen-16 isotopes were in some cases rich, but in other cases were poor. And they also found that some of the isotope ratios were similar to those found by researchers studying samples brought back from Comet Wild 2.