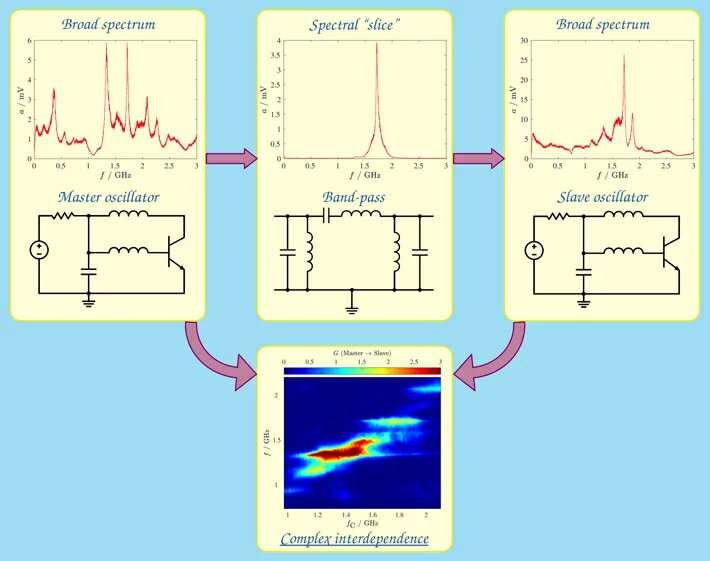 Conceptual overview of the coupling scheme between a chaotic master and slave oscillator via a bandpass filter, and the resulting complex interdependence between their activities. Credit: Chaos, solitons and fractals (2022). DOI: 10.1016/j.chaos.2022.112854

The abstract notion that the whole can be found in every part of something has long fascinated engaged thinkers in all fields of philosophy and experimental science, from Immanuel Kant on the essence of time to David Bohm on the notion of order, and of the self – similarity of fractal structures to the defining properties of holograms.

However, it has naturally remained foreign to electronic engineering, which strives to develop ever more specialized and efficient circuits exchanging signals with very controlled characteristics. In contrast, in nature’s most diverse complex systems, such as the brain, the generation of activities with characteristics that present themselves similarly on different time scales, or frequencies, is an almost ubiquitous observation.

In a quest to explore new, unorthodox approaches to designing systems capable of solving difficult computational and control problems, physicists and engineers have for decades studied networks made up of chaotic oscillators. These are systems that can be easily realized using analog electronic, optical and mechanical components.

Their striking property is that, although they are quite simple in structure, they can generate behaviors that are, at the same time, incredibly complex and far from random.

“Chaos involves extreme sensitivity to initial conditions, which means that the activity at any instant is effectively unpredictable. However, a crucial aspect is that the geometric arrangements of the trajectories generated by the chaotic signals have well-defined properties which, alongside to the frequency distribution, are rather stable and reproducible.Since these characteristics can change in many ways depending on the input voltage or parameter settings like a resistance value, these circuits are interesting as a basis for making new forms of distributed computing, for example, based on sensor readings,” explains Dr. Ludovico Minati, lead author of the study.

“In our recent work, we have shown that they can be used effectively to achieve the kind of physical reservoirs that can simplify the training of neural networks,” adds Jim Bartels, a PhD student in the Nano Sensing Unit, where the study was conducted.

When two or more chaotic oscillators are coupled together, the most interesting behaviors emerge as they attract and repel their activities while trying to find a balance, in a way that regular periodic oscillators simply cannot access. “Two years ago, work done in our lab demonstrated that these behaviors could, at least in principle, be used as a way to gather readings from remote sensors and directly provide statistics such as the average value,” adds Dr Ludovico Minati.

However, the complex nature of chaotic signals means that they typically exhibit broad frequency spectra, which are very different from the narrow, well-delineated ones typically used in modern wireless communications. “As a result, it becomes very difficult, if not impossible, to achieve coupling over the air. Not only because the antennas are often very tuned to specific frequencies, but also and above all because radio regulations only allow broadcasting within well-defined regions,” says Mr. Boyan Li, a master’s student and second author of the study.

To date, there is a substantial body of literature covering the many effects that can occur in chaotic oscillator ensembles. For example, small groups of nodes that preferentially synchronize with each other can appear, much like groups of people gathered at a party, as well as unexpected distant interdependencies that remind us of the link problem in the brain. .

However, surprisingly, almost no study has considered the possibility (or not) of coupling chaotic oscillators through a mechanism, essentially a filter, which only transfers a narrow range of frequencies. For this reason, Tokyo Tech researchers decided to explore the behavior of a pair of chaotic oscillators. They paired them using a filter that they could easily tune to pass only a narrow range of frequencies, while maintaining a wired connection between them for the time being.

“We decided to use an extraordinarily simple type of chaotic oscillator, involving only a transistor and a handful of passive components, and known as the Minati-Frasca oscillator. This family of oscillators was introduced about five years ago by researchers in Italy and Poland, and has many remarkable properties, as reported in a recent book. Recently, we have been interested in understanding them and their many potential applications,” says Dr. Hiroyuki Ito, head of the Nano Sensing unit where the study was conducted.

Based on simulations and measurements, the research team was able to demonstrate that it is in fact possible to synchronize these oscillators even without transferring the entire broad spectrum, but just a relatively narrow “slice” of it. . They like to compare this to a situation where the whole is, at least partially, in a part.

When operating in the lower gigahertz region, close to where first-generation wireless devices operate, the oscillators can synchronize by only transmitting a few percentage points of the bandwidth. As expected, the synchronization was not complete, meaning that the oscillators were not completely tracking each other’s activity.

“This kind of incomplete, or weak, interdependence is precisely the region where the most interesting effects can appear at the level of a network of nodes. It’s quite similar between oscillators and neurons, as one of our previous works showed. mechanisms that represent the next frontier for the implementation of distributed computing based on emergent behaviors, which many research groups around the world are pursuing,” adds Dr. Mattia Frasca from the University of Catania in Italy, who has initially co-discovered these circuits with Dr. Minati, later jointly analyzing their behaviors and relationships to other systems in nature, and provided several theoretical foundations that were used for study by Tokyo Tech researchers.

The researchers observed that while a narrow slice of the spectrum was sufficient to achieve detectable synchronization, the central location and width of the filter had large effects. Using a multitude of analysis techniques, they were able to see that in some regions the activity of the slave oscillator followed the filter setting in an obvious way, while in others different and rather more complex effects appeared.

“It’s a good example of the wealth of behaviors available for these circuits, which remain little known in the electronic engineering community. It’s quite different from the simpler responses of periodic systems, which are either locked or not locked. There is still a long way to go before we can really make effective applications out of these phenomena, so it must be said that this is basic research at the moment, but it is very fascinating to to think that in the future, we will be able to achieve certain aspects of detection using these unusual approaches as well,” adds Zixuan Li, doctoral student and co-author of the study.

After this interview, the team explained that this type of research will first have to be extended by understanding more deeply the phenomena and how they can be used to generate an interesting collective activity. Then the two main engineering challenges will be to demonstrate the couplings on a real wireless link, while meeting all the radio requirements, and to significantly minimize the power consumption, also using some results from their previous research.

“If effective solutions are found to these challenges, then one of our main goals is to demonstrate distributed sensing that can be used in applications important to society, such as land condition monitoring in precision agriculture. concludes Dr. Hiroyuki Ito. The methodology and results are reported in a recent article published in Chaos, solitons and fractalsand all experimental recordings have been made freely available for others to use in future work.

Provided by Tokyo Institute of Technology

Quote: Synchronizing Chaos Across a Narrow Slice of the Spectrum (2022, November 25) Retrieved November 26, 2022 from https://phys.org/news/2022-11-synchronizing-chaos-narrow-slice-spectrum.html